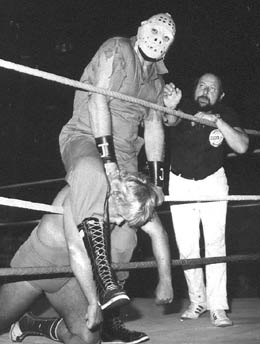 JASON THE TERRIBLE
Karl Moffat's Jason the Terrible character was completely and totally unoriginal, yet fairly effective. He dressed as Friday the 13th villain Jason Vorhees, complete with chainsaw and hockey mask. He bled buckets and made his opponents opponents bleed buckets. He wasn't much of a wrestler, but he was a pretty competent brawler. According to Bret Hart's book he was kind of a dick, but Bret is a bitter old drama hag, so take that for what you will. Later on some other dude took the gimmick. So yeah. Here's some of his brawls.