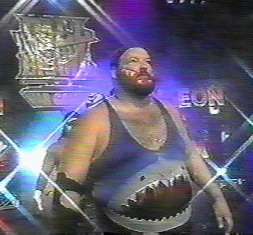 I absolutely LOVED John Tenta. As far as big, fat, sloppy dudes go, John was the best. He was an amazing worker for a dude his size. He made an instant impact in his WWF debut, attacking the Ultimate Warrior and being launched as a major heel right off the bat. After several solid years in the WWF he headed off to WCW where he debuted as Avalanche. WWF legal got on that and WCW was forced to change his gimmick. So what did they choose? A shark. The Shark was yet another member of Kevin Sullivan's crap factory known as the Dungeon of Doom. To his credit he threw himself so far into the gimmick that he even had his large tiger tattoo on his left arm turned into a shark. Well, as fate would have it, wrestling fans were not very receptive to a man wrestling as a shark and the gimmick flopped. Poor John, he deserved better. For your viewing pleasure I have tracked down the origin of the Shark character with Tenta claiming to be a shark as well as the promo where he claimed he was NOT, in fact, a shark. Also thrown in is a fun little match between Shark and Sting. Good night, y'all.