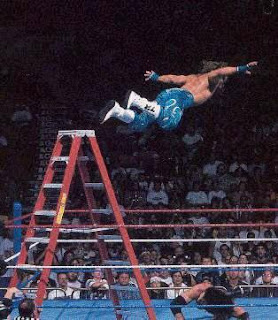 I bet a lot of you thought this would be #1.

Interestingly, this is the second face vs face match in a row on the list. How that came to be, I'll let the almighty Wiki explain:

Michaels won the title off Jeff Jarrett at the In Your House 2 pay-per-view, pinning Jarrett after a superkick. Michaels at the pay-per-view also played a part in the Lumberjack main event match between Diesel and Sycho Sid for the WWF Championship. Michaels, who was one of Diesel's lumberjacks, performed a double axe handle off the top rope onto Sid on the outside of the ring, helping Diesel retain the title. This was revenge for the assault from Sid a few months earlier—Sid powerbombed Michaels three times on the April 3 edition of Raw, putting him, as part of the storyline, on the sidelines for six weeks. Sid, on the July 24 edition of Raw, declared revenge for Michaels' storyline actions at the pay-per-view. As a result of Sid's comments, a match was announced between Sid and Michaels at SummerSlam. In a sudden change of booking direction, however, the Sid versus Michaels match scheduled for SummerSlam was scrapped, and replaced with Michaels defending the Intercontinental Championship in a ladder match against another "face" superstar, Razor Ramon, despite no on-screen buildup between the two. Michaels faced Jerry Lawler on the August 14 edition of Raw, during which, Sid came down to ringside. Sid attempted to interfere late on in the contest with a clothesline, but Michaels ducked to avoid the move, performing a Superkick to Sid. Sid and Lawler manage to regain the upper-hand, with Sid chokeslamming Michaels. Ramon ran in to help Michaels. This led to a staredown between SummerSlam opponents Michaels and Ramon, leading to the two fighting each other, in which Ramon got the upper-hand in, grounding Michaels.

What followed afterwards at SUMMERSLAM 95 is still considered to this day one of the greatest matches in WWE history. Enjoy.