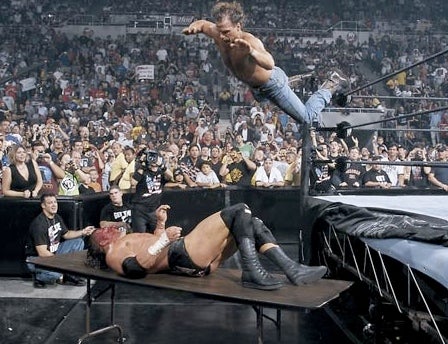 What people forget about when they remember this match is, Michaels had been out for 4 YEARS at this point. He had retired with a badly injured back and started up his Texas Wrestling Academy, helping to break into the business Bryan Danielson among others. There was little doubt that if he were to return to active wrestling, it would involve D-Generation X in some form. Taken from Wikipedia:

At Vengeance, Michaels returned after being out for 4 years. Triple H was given the choice of deciding which brand he would appear for, SmackDown or Raw, and Michaels helped him decide by offering to reform D-Generation X (DX) on the Raw brand. Triple H chose to go to Raw, but the following night, as Michaels and Triple H were in the middle of reforming DX, Triple H attacked Michaels, before leaving. The next week, Michaels was attacked from behind by Triple H, who put his head through a car window. The next week, Michaels told Triple H that he isn't 100% but he will be at SummerSlam.

What followed was a match so brutal, some believed Michaels would have to take more time off for what should have been a reinjured back.

What this, and THEN argue why it shouldn't be #1.