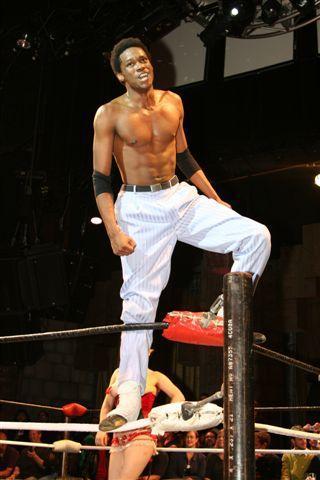 Human Tornado has been everywhere and done just about everything there is to do as an independent professional wrestler. He's wrestled for every indie you can think of and won numerous championships. He's been featured in a motion picture and wrestled for MTV. He's been a staple of Insane Clown Posse's Juggalo Championship Wrestling. He calls California's Pro Wrestling Guerrilla his home, and through it all he has remained, unreservedly, Human Tornado.

What was the moment or event that made you decide that wrestling was what you wanted to dedicate yourself to?
Wrestlemania 12 at the Arrowhead Pond of Anaheim, Ironman Match, Two of my favorite wrestlers at the time going toe to toe in my hometown was magic. From then on I've always dreamt about being a wrestler.

I would be hard pressed to think of a wrestler that works for as many diverse promotions as you do. Are there any companies that you prefer to work with more than others?
Well, most know that PWG is my home. There's nothing like entertaining your peers in the same area you live, But at the same time I've made new homes in other promotions and they've all accepted me as one of their own.

Is there any difference in your preparation when you’re wrestling for different companies or in front of different crowds?
Not really. All my preparation is the same everywhere I go....iPod! lol

How did your role in Nacho Libre come about? What was that experience like?
Filming "Nacho Libre" was an amazing time. My first time doing a movie and being deep in the heart of Mexico...It was WAY better than TJ.

Speaking of strange, how is wrestling for JCW? Were you familiar with ICP before you started getting booked there?
I knew of ICP through WWF at the time. JCW is a great place to work. Lots of wrestlers and legends have been there. And of course, Them Juggalos are some Killa Fans! I love em!

What would you consider to be some of your defining moments in PWG?
Easily, It was winning the PWG World Title from Joey Ryan in the same building where I witnessed my very first indy wrestling show. Then I won the title at the same place again to become a two-time Champ.

When you turned on Candace LaRae at BoLA 2007, that’s one of the largest and most visceral reactions I’ve ever seen from a wrestling crowd. Did you have any reservations about doing the Benoit taunt and crossface on a woman so soon after the murders?
Nope!

Since professional wrestling is largely about provoking a reaction in the crowd, is there a line that shouldn’t be crossed? If so, where is that line?
I still haven't found it yet, but my ethics is good.

You have an ability to get the crowd in the palm of your hand the way few independent wrestlers do. Where do you make the connection with them?
I understand what my crowd wants because I want the same thing sometimes.

What do you remember about your experience working for Wrestling Society X?
WSX = Explosively Fun Times! Wish they had a better chance though.

You were out for nearly a year with a knee injury. How does an injury like that set a wrestler back?
A serious injury like my knee stops me from doing what I love to do, but at the same time I live and I learn.

What stands out in your mind about your classic and lengthy feud with Chris Hero?
How much pain I was in after wrestling in the Cage Match with an already injured knee. Es No Bueno!

What’s your take on the PWG crowd’s recent reactions to Chris Hero and the Young Bucks?
I really could care less bout Hero or the Buck-a-Roo's. They both have something I want always and that's Gold!

There was a recent announcement that Rob Van Dam will be working with PWG in January. What is it like to be working with people like Paul London, Brian Kendrick, and now RVD?
It's always cool to see new faces around PWG. With guys like London, Kendrick, and RVD it just helps PWG as 09 has been a Good year for the Guerrillas!

Are there any wrestlers that you would love to work with or against?
All of them! Bring em On!

What are your views of the current WWE, TNA and ROH products?
Needs More Human Tornado!!!

What are your ultimate goals in the business? When all is said and done, what will you have wanted to accomplish?
My ultimate goal is to wrestle at The Pond in Anaheim (Honda Center). That's where this dream i'm living in started.

What is your favorite match you’ve ever wrestled?
Against Ruckus at Cage Of Death 8. Even though I lost, he still got SERVED!