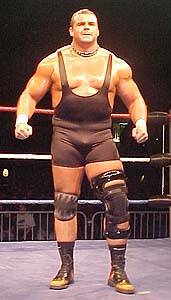 From the new Observer (Pierre is better known to some fans as Quebeccer Pierre, Jean-Pierre Lafitte, and/or X):

In a weird story, Pierre-Carl Ouellet did an interview with James Guttman and talked about the most recent tryout he had at Smackdown. "After the show, I asked Mike Rotunda, I said, `Should I wait for their phone call or should I wait and thank Vince for the opportunity?’ Mike said, `No Carl. You should wait for Vince and thank him, so it’ll be fresh in his memory, you know.’ So I’m just waiting at the end of the Smackdown show. He’s coming out and it’s maybe 12:30 or 1 a.m. And I go, `Vince, I just want to...,’ and he shoved me into the wall like I was a piece of crap. I felt pretty bad. Right after that, I got to my hotel room and called John Laurinaitis.".