Stand Back, It's an Interview!

Share All sharing options for: Stand Back, It's an Interview! 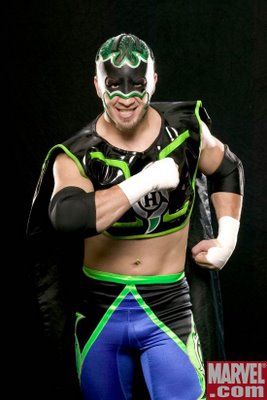 Marvel Comics recently interviewed WWE "star" The Hurricane, who is based largely on DC Comics' Green Lantern, but whatever. As a major comic book nerd, I was all over this, despite my feelings toward Mr. The Hurricane.

Some highlights include Hurricane showing off his new molded-furrowed-brow mask, Todd Nauck drawing a fantastic picture of The Hurricane, and Hurricane really playing up the superhero shtick.

The main reason to watch the (very short) two videos on marvel.com is because The Hurricane may very well have the single most backwoods hillbilly voice in the history of professional wrestling, which is saying quite a bit. Hearing him say "hurra-senses" in a subdued manner is a one-way ticket to giggletown.