Vince McMoments: "And for some reason I wanted to put crushed leaves into her. Don't know why, but I remember that."

Share All sharing options for: Vince McMoments: "And for some reason I wanted to put crushed leaves into her. Don't know why, but I remember that." 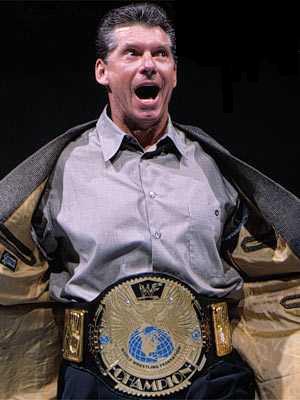 In February of 2001, Playboy conducted an interview which perhaps most notably included the above quote. This interview gave us new insight into why Vince McMahon became who he is.

You can read part of the interview by going here and then here.

Check out the most notable excerpts after the jump.

PLAYBOY: Was the abuse all physical, or was there sexual abuse, too?

MCMAHON: That's not anything I would like to embellish. Just because it was weird.

PLAYBOY: Did it come from the same man?

PLAYBOY: That's so mysterious. It sounds like a difficult thing for a kid to deal with.

MCMAHON: You know, I'm not big on excuses. When I hear people from the projects, or anywhere else, blame their actions on the way they grew up, I think it's a crock of shit. You can rise above it. This country gives you the opportunity if you want to take it, so don't blame your environment. I look down on people who use their environment as a crutch.

PLAYBOY: Surely it must shape a person.

MCMAHON: No doubt. I don't think we escape our experiences. Things you may think you've pushed to the recesses of your mind, they'll surface at the most inopportune time, when you least expect it. We can use those things, turn them into positives-- change for the better. But they do tend to resurface.

PLAYBOY: We can leave that topic, but one last thing first. You said that the sexual abuse in your childhood "wasn't from the male". It's well known that you're estranged from your mother. Have we found the reason?

PLAYBOY: Still, you beat the court-martial and even graduated. By then you had stolen cars and run moonshine. You'd had a drink. You'd had your first joint. You'd lost your virginity.MCMAHON: [Pauses] That was at a very young age. I remember, probably in the first grade, being invited to a matinee film with my stepbrother and his girlfriends, and I remember them playing with me. Playing my penis, and giggling. I thought that was pretty cool. That was my initiation into sex. At that age you don't necessarily achieve an erection, but it was cool. At around the same time there was a girl my age who was, in essence, my cousin. Later in life she actually wound up marrying that asshole Leo Lupton, my stepfather! Boy this sounds like Tobacco Road. Anyway, I remember the two of us being so curious about each other's bodies, but not knowing what the hell to do. We would go into the woods and get naked together. It felt good. And for some reason I wanted to put crushed leaves into her. Don't know why, but I remember that. I don't remember the first time I had intercourse, believe it or not.

PLAYBOY: Your growing up was pretty accelerated.