Kimbo Killer on Display this Weekend

Share All sharing options for: Kimbo Killer on Display this Weekend 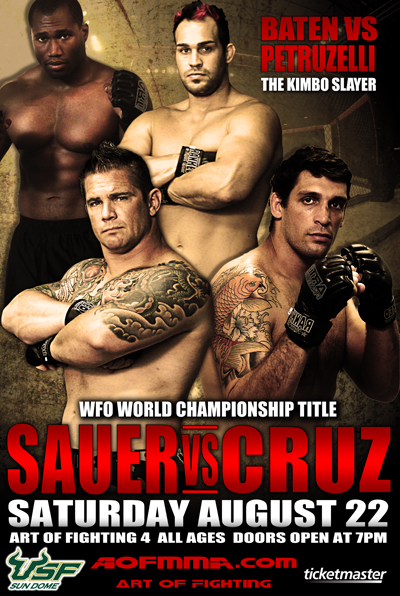 Also on the card: veterans Tom Sauer and Marcio "Pe De Pano" Cruz square off for the WFO World title.

Seth Petruzelli is a seasoned MMA fighter with appearances in the WEC, UFC, and EliteXC. Petruzelli is well known as the "Kimbo Killer" after his October 2008 destruction of street fighting youTube star Kimbo Slice. Petruzelli wasn't even scheduled to fight Kimbo, but after a cut opened above MMA legend Ken Shamrock's eye, Seth "The Silverback" Petruzelli stepped in to fill his spot and fill it he did. Now seen as the "Rocky" of MMA, Petruzelli KO'd Slice in an astonishing 14 seconds of the first round in front of a stunned crowd of millions on CBS. The August 22 bout at the USF SUN DOME will be Petruzelli's first fight since defeating Kimbo Slice.

Chris Baten is no Kimbo. Baten is a seasoned MMA fighter who has made appearances in the now extinct IFL. At 205 lbs. Baten will be an entirely different opponent for Petruzelli as fans should expect to see a standup war. Baten is also a Tampa Area police officer who has a large following in the area. Baten will seek to defeat a big time name in the sport cementing his name as one of the world's best fighters.