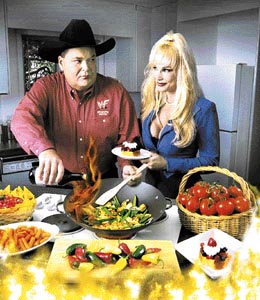 Over the weekend, Jim Ross posted this:

What has occurred lately for Angle obviously isn't working for a legitimately decent human being. It seems as if problems exist and my theory has always been that if one can't, after doing all that's humanly possible, solve a problem then the only alternative is to eliminate the problem.

I know he's usually cryptic, but...yeah, that sure reads badly.

Today, he posted about Angle again:

We received some unique feedback on the thoughts I wrote this weekend on the Kurt Angle arrest situation. Let me make it clear that Angle has not been convicted of any thing. I never even mentioned the allegations regarding alleged physical abuse to a woman which, by the way, I do not believe. The issue is that when external factors adversely affect one's life and when one's life is under such a professional microscope and is overly scrutinized there are times when one simply needs to take him or herself out of the game for a while to regroup. Call it a vacation or even a leave of absence but stepping away and being able to exhale sometimes isn't a bad thing. (I have these emotions all the time and would love to be able to recharge my batteries from time to time.) I remain steadfast that I believe Kurt Angle to be a good hearted human being but I also believe that sometimes that he can be his own worst enemy. Many of us have that propensity. The drive it takes to create an Olympic Champion can be both a blessing and a curse. I have not talked to Kurt in years but I still feel as if I know him very well and for him to take a moment to simplify his life, re-prioritize it and to determine what's most important in his life might be timely.

I often times see "wrestling couples" hooking up and I truly feel empathy for them. As I have said in this space many times, with the exception of a minority of examples, "wrestling relationships" are usually bound to implode which then adversely affects the locker room and often times forces many within said locker room to "choose sides." Choosing sides in a matter such as this isn't good as the only "side" a wrestler should have is the "side" of the company that pays them their pay check.