Another Wrestler to Try MMA?

Share All sharing options for: Another Wrestler to Try MMA? 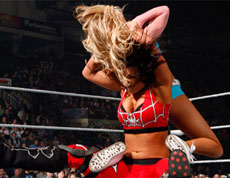 Lisa Marie Varon, know to wrestling fans as Victoria, may be the next wrestling star to give MMA a try. Varon's manager, J.T. Stewart, also manages MMA star Rich Franklin and thinks she has a future in the sport. But wait you ask? Isn't she with TNA?

According to Stewart, the TNA contracts are non-exclusive. Just like Bobby Lashley, Victoria can wrestle and fight at the same time. And, she may have the physical tools to be a star.

"Obviously, with the exposure from the WWE, she already had the marquee value," Stewart said. "She has the name. Women’s MMA is just starting to peak, and with her built-in fan base, she’ll have lot of opportunities with endorsements, sponsorships, autograph signings and card shows.

"Plus, she’s also just very athletic. We’ve seen Lashley and Lesnar cross over and do very well in MMA. I’d expect no less from her."