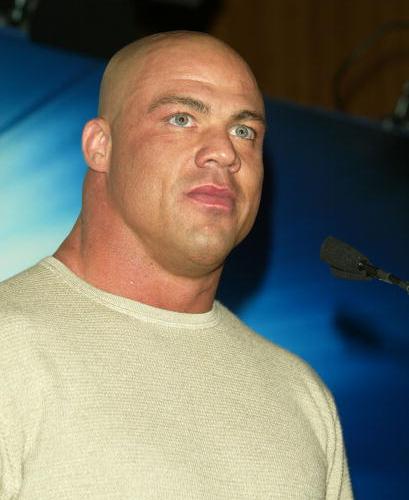 WPXI in Pittsburgh has posted the text of the complaint against Kurt Angle.

Full text after the jump (with the victim's name redacted).

On 8-15-09 at 7:50am, I was dispatched to the area of Giant Eagle and Get Go for a report of a PFA violation that was taking place in the lot.

As I was en route to the scene from Robinson Towne Center, dispatch advised me that the male offender (later ID'd as Kurt Angle) was in a sliver Cadillac now headed toward the Robinson Mall on Park Manor and was wearing a green colored t-shirt.

I approached the traffic signal at the intersection of Park Manor and Robinson Center Drive.

As I was at the light, I observed a silver Cadillac STS travelling down Park Manor and making the left hand turn at Robinson Center Drive and continuing onto Park Manor.

As the vehicle passed me, I could clearly see the driver had on a green t-shirt.

I turned around my marked police unit and made a traffic stop on the vehicle as it pulled into the Starbucks lot in Robinson Towne Center.

I was advised by dispatch that the driver should be Kurt Angle and that he was under DUI suspension.

I approached the driver who provided me with his (license) that did ID him as Kurt Angle.

At this time, I was assisted on scene by (two other officers).

I ran Angle's license which did come back as being under DUI suspension.

I advised Angle of the nature of the call and if he violated a PFA that was put out on him.

Angle stated his ex-girlfriend, (name removed), and he had an altercation at his residence in Moon township last evening.

Angle then stated she used his vehicle and went downtown to obtain an emergency PFA on him.

He then stated he was removed from the residence by Moon Township Police.

I advised Angle that his girlfriend had called police and stated he was stalking her at the Giant Eagle lot.

Angle denied this and stated he was looking for a hotel to stay in and never saw her.

Angle blurted out that he had his girlfriend's cell phone even though I had not asked about it at the time.

Dispatch advised that (the victim) was at our station filing a formal written complaint.

Since Angle was under DUI suspension, a tow truck was called for his vehicle.

I checked the area where Angle was sitting incident to his arrest.

There was a medium sized bag that contained Angle's ID as well as numerous credit cards.

This was taken with Angle to avoid anything happening to his credit cards.

In the front seat there was a large zippered black bag.

Inside one of the compartments was a capped syringe and two vials of "Hygetropin" which also contained the label "recumbant Human Growth Hormone Somatropin for injection."

Angle was asked about this item and he stated that he had a legal prescription for it and would be able to provide a copy of it.

Angle was placed into custody for the PFA violation and the drug charges and taken to the Robinson Twp. Police Station without incident by (the officer).

The vehicle was removed from the scene. (An officer) did locate a maroon colored blackberry phone from the car which (the victim) did later ID as hers. It was turned over to her at the station.

At the Robinson Police Station, I spoke with (the victim).

(She) stated she was at the Starbucks Store at the Robinson Towne Center outside at a table using the internet because she was scared to use the computer at her residence as she was in fear of Angle.

At this time, she saw Angle circle the parking lot three times; staring at her while she was outside.

(She) stated she then hurriedly left the area and saw Angle in the silver Cadillac.

She drove to Crucible Research by Giant Eagle and observed Angle in the Giant Eagle parking lot "circling" in his vehicle.

She stated to me that she could see Angle accessing her cell phone that she left in the car and feared he was deleting her text messages and pictures she had of past abuse against Angle.

(She) stated she then called 911 to report the incident. Angle was processed without incident and lodged into a holding cell to await arraignment.

The two vials of "HGH" and the used capped syringe will be logged into evidence.

(The victim) was provided a victim's rights booklet which she signed for. (She) stated she was going to stay (at a different location).

I received a faxed copy of the emergency PFA from Moon Township Police as well as verification that Angle was served the PFA by Moon Police this date at approximately 6:19am.

I made a copy of the emergency PFA she obtained that will be posted in the active PFA section of the police department. I also did file an ICC complaint on Angle.