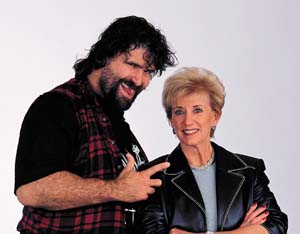 Statement on Linda McMahon and the United States Senate

Linda McMahon, CEO of World Wrestling Entertainment, is considering a run for the United States Senate representing the state of Connecticut. Should she decide to run, Linda would step down as CEO, and Vince McMahon would assume the duties of CEO in addition to his current position as WWE Chairman.

Can you imagine how busy the person assigned to do opposition research on the frikkin McMahon family would be? What an amazing thing this would be. With a Senate seat up for grabs, the skeletons would be marching out of the McMahon closet on a regular basis. And if she ran and lost, the WWE skits mocking sub-committees or rehashing the Senate Page Scandal would be epic!

We NEED this to happen.