Share All sharing options for: Vince McMoments: "I'm sorry, I find that comedic." 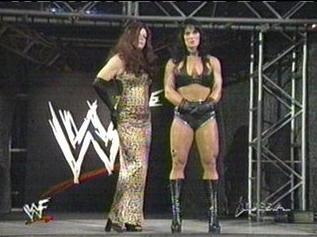 "Pro Wrestling's Hold On America" was a 1999 episode of ESPN's Outside The Lines probably most notable for its coverage of wrestler deaths, but it was also fun to watch at times. One of these times was when they showed Vince McMahon footage of the infamous skit involving Mark Henry and Chyna's friend Sammy where they get amorous, leading to Henry uttering the immortal words "Oh! Sweet Jesus! You got a penis!"

Vince giggles at the skit as only he can, much to his perceived consternation of the interviewer, before explaining that "I'm sorry, I find that comedic." After the McMoment is an awesome interview with a 9 year-old boy where he explains the intricacies of the world's strongest man "mating" with a pre-op male to female transsexual.