Sorry for being a day late with this one. 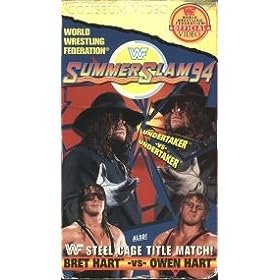 This was supposed to be the blow-off match to one of the best feuds of the 90s.

Owen and Bret started having problems at Survivor Series 93. The Hart Brothers (Bret, Owen, Bruce, and Keith) had an elimination tag match against Shawn Michaels and his "Knights" (Jerry "the King" Lawler played a part in this angle), with Owen being the only brother eliminated due to miscommunication with Bret. Owen was angry, but they reconciled in time for a World Tag Team Title match against the Quebecers at Royal Rumble 94. During the match Bret injured his knee, which caused the referee to end the match. Owen then attacked Bret, officially starting this feud. They met at Wrestlemania X, with Owen beating Bret, but Bret went on to pin Yokozuna for the World Title later that night. Their brother in law, Jim Neidhart, entered the picture at King of the Ring 94, aligning himself with Owen by helping him win the tournament. This match was signed to settle the feud. It didn't, but it did get a 5 star rating from Dave Meltzer. Enjoy!