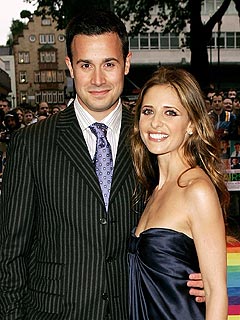 We had heard that guest hosting RAW was all set to join Letterman and Kimmel as just another stop for movie stars looking to plug their latest films. Instead, the WWE seems to be having problems securing A or even B level talent for this gig. After scoring Shaq and Jeremy Piven, the promotion has been reduced to inbred talent like Sergeant Slaughter and Freddie Prinze Jr.

Prinze is a long time celebrity fan who took his involvement to the next level when he joined the creative team briefly. He hasn't really been a movie star for years and is best known as "that guy that married Buffy."

If this experiment is going to work, it has to have name talent, if not everytime, at least more than occasionally. Slaughter and Prinze are not positive signs that the guest host is long for this world.