Up in Smoke: Diaz Out

Share All sharing options for: Up in Smoke: Diaz Out 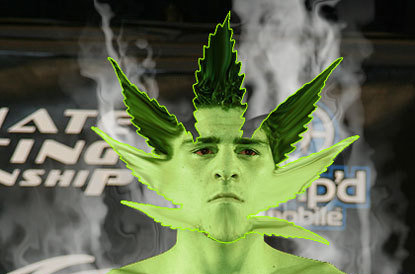 Everyone knows Strikeforce fighter Nick Diaz likes to smoke it up. He's a card carrying medical marijuana recipient who has already been busted once for fighting while high. So when the state of California called looking for some urine, Diaz was nowhere to be found. Some said he was training in Florida. Others claimed he was in the mountains. We don't know for sure where he was, but it wasn't at the urinalysis.

But apparently it is a little more complicated than a fighter refusing a pee test.

According to Diaz's management, he had a special arrangement with the state. He agreed to be clean on fight night, but because of his medical condition, they wouldn't test him at random for marijuana. That deal, apparently, no longer stands.

"They changed it without any notification," said Gracie. "No one had any time. The old guys were doing things based off of California law, and I knew California law didn't change. He's licensed... it's legal. They're own legal team came out with a ruling that said (compassionate use was allowed). Then all of a sudden they're saying we're doing drug tests, and cannabis is included, it's not just performance enhancers. To flush it out of his system, it takes 10 days, and we don't have that."

Regardless of the ethics and legality behind the Diaz testing, he's out. And the ultimate meathead is in. Jesse Taylor has taken Diaz's spot against Xtreme Couture's Jay Hieron.

Infamous for his removal from "TUF 7" after qualifying for the season's finals, Taylor then lost by submission to C.B. Dollaway at UFC Fight Night 14 in July 2008. Taylor has since gone on to record seven-straight wins, including two victories in July. In fact, the bout will be Taylor's third in just five weeks.