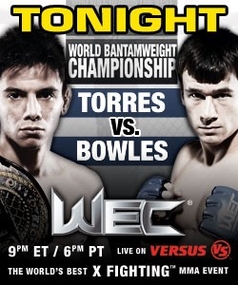 Following a lackluster undercard, tonight's WEC event on Versus delivered in the main event with what was possibly the fight of the weekend. Full results after the jump.

Takeya Mizugaki d. Jeff Curran via split decision in another very close one. Mizugaki likely next in line for a bantamweight title shot.

Brian Bowles d. Miguel Torres via first round knockout to become the new WEC bantamweight champion. This was an insane, insane three minutes or so. Neither guy touched the other for the entire first minute, and then suddenly it was a frantic war. Just as Torres was backing Bowles up with a flurry of strikes, Bowles caught him with heavy, heavy hands and pummeled him unconscious and then some due to the ref doing his best Steve Mazagatti impression. Get the replay and watch this fight ASAP.