Where in the World is Forrest Griffin?

Share All sharing options for: Where in the World is Forrest Griffin? 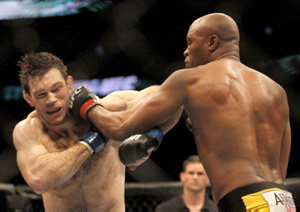 After Forrest Griffin's stunning loss to Anderson Silva he bailed out of the cage and disappeared. "He might be in Georgia by now, he ran out and I haven’t seen him since," UFC President Dana White said. It turns out the intense Griffin wasn't just a bad sport; he was injured early in the fight and seeking medical attention. He suffered a dislocated jaw and was having trouble hearing.

Griffin, who had promised his coaches to try to clinch with Silva and take him down, instead stood right in front of the dangerous Brazilian striker. Griffin's straight forward attack was entirely ineffective. Silva, hands dangling dismissively below his waist, kept his feet moving and knocked Griffin down three times in the first round. It was a dominating performance by one of the UFC's greats and sent the former champion Griffin back to the drawing board.