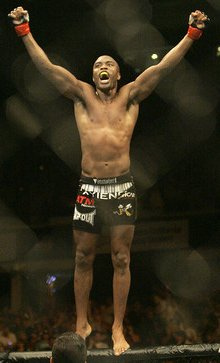 It was an embarrassing performance for Forrest Griffin, a former Light Heavyweight Champion. Anderson Silva, the Middleweight Champion, made him look silly. He outclassed him and made sure the crowd knew it. Silva didn't even feel the need to raise his hands, daring Forrest to try to hit him.

Instead of trying to overpower Silva like he had hinted he might, Griffin stuck to his regular style. He was a pitter patter volume fighter trying to trade with a much better and faster opponent. That ended with Griffin on the mat quitting after a jab, then departing the cage in a fury.

Silva, who was booed hard pre-fight seemed to get the crowd back, and if it was happening in a place like Philly, you can imagine he was regaining favor from fans nationwide. After Silva defends against Dan Henderson, who can he fight at light heavyweight? If he's already beaten a former champion, could a 205-pound title shot be next?