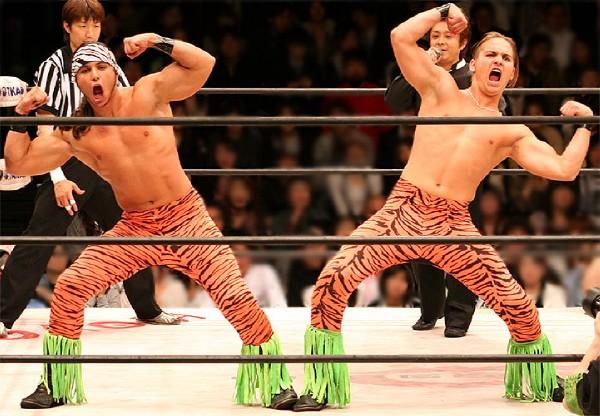 Southern California natives and brothers Matt and Nick Jackson have had quite a year. It's only August, and already The Young Bucks have made their debuts in Ring of Honor, CHIKARA, and Dragon Gate USA, the latter of which will be their first match on PPV in North America. Since mid-2008, the buzz surrounding the Young Bucks has grown steadily, originating with their hometown crowds in Southern California and spurred on by their performances in Pro Wrestling Guerrilla. They have been PWG Tag Team Champions for nearly a year, picking up wins against teams like the Motor City Machine Guns and successfully defending the belts in Japan. Nick and Matt are considered one of the premier tag teams in the world today, and their popularity has recently exploded on the East Coast, where fans are just now being exposed to their high-flying style. Clad in tiger-print tassled tights, they are a callback to the glory days of tag team wrestling like The Rockers, and are reminding fans around the world how exciting and unique tag team wrestling can be.

The Young Bucks were kind enough to take time out of their busy schedule for an interview with us here at Ring Psych.

Ring Psychology: What was the moment or event that made the two of you decide that wrestling was what you wanted to dedicate yourselves to?

Matt: We put a ring in our backyard. I was 16 years old, Nick was 12 years and Malachi was 10 years old! We taught ourselves how to do flips and impersonated what we saw on television. We always loved wrestling, but doing it yourself was so much more fun. We fell in love at first bump.

RP: 2009 has been something of a breakout year for the two of you so far: You’ve debuted in ROH, CHIKARA, Dragon Gate USA, had an extremely well-received tour of Japan with Dragon Gate, and will make your PPV debut. What has it been like to have so many big events in such a short time span?

Nick: It's surreal. Everything has happened so fast. Matt and I are just blessed for all of the great opportunities that have come to us. We've been in big match situations and have been fortunate enough to hit home runs.

RP: Have there been big matches where you have really pushed yourselves to the limit? Do you ever feel like certain matches mean more than others?

Matt: We treat all matches the same. We always want to steal the show no matter where we are wrestling. Big show, small show, huge show. It's our goal for the fans to say that they had the most fun watching the Young Bucks. Sometimes we REALLY have to turn it up big time. An example of this was at the DGUSA debut show. We knew that it was a big show and we had to do our best... actually better than our best.. In the end, we were very happy with the match.

RP: The buzz surrounding you on the internet is growing all the time, with many considering you among the best tag teams in the world at the moment. Do you ever feel pressure on you with such high expectations?

Matt: Oh, sure. You get a reputation for something and people begin to watch you with higher expectations. Even the wrestlers expect a certain quality from you. In the end, you just want to do your best and hope that it lives up to the hype. Nick and I always feel the pressure and are stressed out before all of our matches. In the end, it's always worth it though.

Nick: We always want to give a good first time impression. That is very important to us. Matt and I always get prepared by talking over ideas on how we want to blow the fans away. If they like you right from the get-go, they'll demand to see more of you.

RP: Are there any significant changes you make in your style depending on what crowd you’re wrestling for?

Matt: For the last five years, Nick and I have been destroying our bodies at even the smallest of indy shows. We've finally learned to take it a little easier at those types of shows after years of advice from other, smarter wrestlers. We'll roll around instead of take bumps and use more ring psychology instead of spots. When we wrestle for the smarter fans (PWG, ROH, DGUSA) we try not to hold anything back. We do more highspots and take bigger bumps at those types of shows. Needless to say, Nick and I enjoy these shows the most.

RP: What’s your favorite type of atmosphere in which to wrestle?

Nick: Matt just answered that pretty well. We love the super hyped up, loud, intense crowds. We feed off of that type of energy. Believe it or not but, when a crowd is hot, it really helps us perform better. OH. And we really like respectful crowds. Los Angeles has been lacking that for the last few months and is fastly becoming our least favorite place to work.

RP: Who are some of your favorite opponents?

Matt: The Cutler Brothers by far are at the top. They are our real life best friends so it's always a ton of fun working with them. We also really love working the Dragon Gate guys. Doi, Yoshino, Cima, Susumu, Saito are amongst our favorite from Japan. We also had killer chemistry with the Motor City Machine Guns. Those guys are insanely talented. We've learned a lot from them.

RP: Who are some wrestlers that you would love to work with or against?

Nick: We really want to work the American Wolves and the Briscoes still. We think that we could kill it with those guys. We'd also love to work Paul London and Brian Kendrick one day. We have such similar styles, I think it'd make for a wonderful match.

RP: What was it like to wrestle for WWE?

Matt: Unreal. It's always been a dream of ours to work with the WWE. I remember standing out in the ring in San Diego on Smackdown looking at the WWE logo near the Titan Tron and it feeling like I was in a dream. I also had a blast taking a chokeslam from the Big Show through a table in Las Vegas for Smackdown... But, my very favorite moment with WWE was when Nick and I dressed up as Shawn Michaels and Triple H and did the Dirt Sheet segment. During rehearsal we got the entire locker room to bust up, including the boss. Nicks "broken back" Shawn Michaels walk is something he's been doing for years to make me and Mal laugh.. now he's doing it on live television for ECW. HAHA!

RP: I’ve read about your desire to wrestle for TNA as your personal goal. What’s the allure of TNA for the two of you?

Nick: Great tag team division that we think we could add to. And, we'd be making enough money to live comfortably on a light schedule. I'm not sure our style would mesh well with the WWE. They'd probably eventually split us up, and we have NO desire to work singles. None whatsoever.

RP: Recently you’ve received enormous positive ovations on the East Coast. At the same time, your hometown crowds at PWG seem to be reacting less favorably towards you. How does it feel to be eliciting two such opposing reactions in different parts of the country?

Matt: It's just strange. I told Nick that we were the most over we've ever been in Philly. A plane ride and week later, we were the most hated. It was kind of disappointing to say the least. Here we are. Two SoCal boys, finally getting to travel the world, doing what we love. It was like, we were so anxious to get home to be with the people that helped start this whole thing. The people who were there from the beginning. We were looking forward to sharing our excitement and thrill to be home with the fans that helped us get where we currently are. Instead, we were treated awful. I've never been so disgusted in my life. I won't get to into it, but Nick and I both agreed that the best thing that could have happened to us was leaving the nest. I guess we wore out our welcome?

RP: What was it like traveling to and wrestling in Japan for the first time?

Nick: Absolutely incredible. It felt incredible debuting at the Korakuen Hall in Tokyo, Japan. Being in the ring with the hot lights on you, watching streamers getting tossed from the crowd and looking out at the Dragon Gate banners from the inside of the ring and a memory I'll never forget. "We made it from our backyard to Japan. Who would have thunk?" I thought to myself while out there.

RP: What are your ultimate goals in the business? When all is said and done, what will you have wanted to accomplish?

Matt: To be remembered as one of the greatest tag teams of all time. We are both work horses and pride ourselves for our work rate. We want to be the type of guys that people remember as always being like having a night off when they worked us: easy to work with, light, safe etc. We also pride our selves in being strong Christians with good morals. We're not like typical guys our ages. I am a married man and am absolutely loyal to my wife. We both like to think of ourselves as guys you can count on in and out of the ring. Hopefully we're remembered for all of these things.

RP: What is your favorite match you’ve ever wrestled?

Nick: There have been so many good ones. Any match with the Cutlers, we had a ton of fun teaming up with Marty Jannetty in 2007 in our hometown, the MCMG match and all of our matches in Japan.. particularly against Doi and Yoshino. DG in LA against Ryo Saito and Susumu Yokosuka along with the recent DGUSA match also make our "TOP" lists.

RP: What is your all-time favorite match (or matches) as wrestling fans?

Matt: Bret vs Owen WM10. Any time the Rockers wrestled. (Even against jobbers). Shawn vs Bret at WM12.

RP: How does it feel to have your younger brother, Malachi, working for some of the same promotions as the two of you?

Matt: We're so proud of Mal. He's really coming into his own this year. He is only 18 years old and has polished his game so drastically. He's also a survivor of a bad car accident involving him being ran over while riding a bike when he was 12 years old, so he's been through a lot. He has the scars to prove it. Nick and I expect BIG things from him!

RP: What milestones do you see yourselves reaching in 2010?

Matt: You guys will be able to watch us on television in 2010. That's a guarantee. Somewhere, we'll be on television.

If you'd like to keep tabs on The Young Bucks, visit them on MySpace at www.myspace.com/theyoungbucks