Jim Cornette on Lesnar: He Gets Heat Everywhere He Goes

Share All sharing options for: Jim Cornette on Lesnar: He Gets Heat Everywhere He Goes 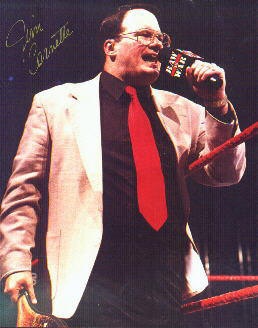 Legendary wrestling manager Jim Cornette had a tough job when he ran Ohio Valley Wrestling. He had to get social misfits like Brock Lesnar ready for a hard and stressful job in pro wrestling. Cornette is one of the best talkers in wrestling history and appeared on Who’s Slamming Who on the Pod-o-matic online service to explain why Brock Lesnar was a great heel in real life, bigger than he ever could have been in wrestling.

"Brock Lesnar is the hottest heel in the entire world of combat sports for a number of reasons. Number one, he’s huge. He’s powerful. He’s a big meat-headed farm boy that just happened to be born a genetic freak and he uses that size and that power and that God-given gifts… heh heh… God-given… to murder people! To slaughter people! To push them around, that’s the very definition of a heel! Then he gets up in the guy’s face that he just pounded into dust and he laughs at him and he trash talks him. Then he gives the finger to the fans and he cuts a promo, he cuts a promo knocking even his own promoter and their sponsor while the people are booing and he’s loving it. That is the very definition of a heel. You can’t get any heeler than that.

On top of that, all the MMA fans they hate him because he’s a fake pro-wrestler that’s come into their world and he’s beating up and dominating all of their heroes. Imagine that! A big, tough, strong, mean bad guy dominating the heroes, pushing them around, beating them up and then trash-talking ‘em and laughing about it. There’s the definition of a heel. And you can tell that he means it.

We used to call him Block Lesnar here in OVW for block-head, not in front of him now, behind his back everybody did, but still, he’s the very definition of a heel. He gets heat wherever he goes. He didn’t have that personality in pro-wrestling because he wasn’t comfortable in pro-wrestling because he can’t act that way, he just is that way. You saw the natural Brock Lesnar come out. I thought it was the greatest moneymaking performance and you know what helped? On a card where all the fights were good, his was the crummiest, shittiest fight of the night! He laid on Mir and pounded into insensibility, there was very little action, there was no excitement, the people hated everything he did, so on top of being an ultimate heel, he had a crummy match and still beat the guy that they were cheering for. So they have no reason to like him on any grounds and Dana White, if he’s smart which he’s proven so far that he is very smart, he has a multi-million dollar commodity just sitting there on his roster and sooner or later when some babyface, because anybody that fights Brock is going to be a babyface unless they drag Bin Laden out of a cave, whoever beats him eventually is going to be the biggest babyface in the history of the UFC."