Share All sharing options for: Wrestling Fans: Lesnar Hates You! 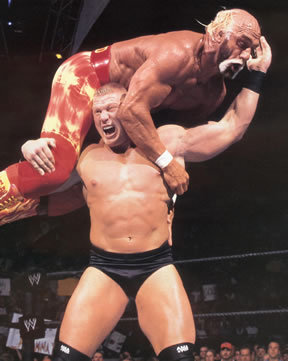 Attention wrestling fans: Brock Lesnar does not want your love. He despises you. The business you love, the art of professional wrestling? He hates it. Hated being a part of it. He has written you out of his life.

Brock hates wrestling so much, he doesn't even like to talk about it. Our special contributor Jonathan Snowden tried to ask him about it. Ask him how that went sometime. Yet wrestling fans have come over in droves to support Brock's fights in the UFC. Camel Clutch doesn't get it and neither do I.

Brock Lesnar has been outspoken about his pro wrestling career since the day he left the WWE. Lesnar hated it there and is not shy to say it. Lesnar recently told ESPN that he has blacked out part of his WWE career. Lesnar despised pro wrestling so much that he doesn’t even care to remember it.

I understand why wrestling fans want to see Brock fight. I just don't get why they are cheering him on. He's the anti-wrestling, the business's biggest critic. Next time you see Brock Lesnar in the Octagon, only one word should come out of your mouth: BOOOOO!