Kendrick Back in PWG

Share All sharing options for: Kendrick Back in PWG 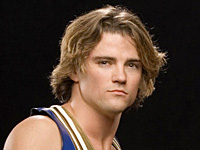 Brian Kendrick is back in the indies after a four year WWE run. Pro Wrestling Guerilla is wasting no time finding him an amazing match with which to make his return. The opponent?

– When Brian Kendrick was last seen on the independent professional wrestling circuit over four years ago, Pro Wrestling Guerrilla had established itself as (probably) the greatest professional wrestling promotion in the universe, Rick Knox had a flowing head of hair, and "American Dragon" Bryan Danielson was widely regarded as the best wrestler in the entire world. Sadly, today only two of those three statements remain true, but according to Brian Kendrick, it’s impossible for any of those things to be true.

Without Brian Kendrick in their lives, fans of Pro Wrestling Guerrilla didn’t know they were missing. Sure, it’s great if some lackwits think you’re the best wrestler in the world, but that’s just because Brian Kendrick isn’t standing next to you. It’s easy to call yourselves the greatest promotion in the universe, but the second Brian Kendrick Pro Wrestling opens its’ doors, everyone else is going out of business. And it’s easy to pretend like the ravages of Male Pattern Baldness haven’t effected you, but one look at the long, luxurious locks of Brian Kendrick tells you otherwise.

A world without Brian Kendrick is not a world that Brian Kendrick wants to live in. That’s why on August 28, at Speed of Sound, Brian Kendrick will return to Pro Wrestling Guerrilla and show the fans exactly what they’ve been missing, and why they’re better off now than they have ever been before. Bryan Danielson, on the other hand, is wondering why everyone he knows from the Texas Wrestling Academy is now completely insane.