Great moments in Brock Lesnar history: "I don't like gays." 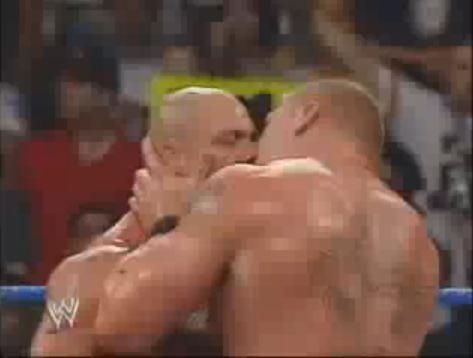 When Brock Lesnar was going for his NFL dreams, a rather infamous article was written about him for ESPN.com. The most notable portion, which led the story, is after the jump, followed by the video that gave us the above image...

The cute and curvy blonde 20-something had no idea what she was getting herself into. In her barely-there halter-top and her glossy red lipstick, she slithered into the giant's arms, set her chin on his chest, looked up into his eyes and delivered the message she had been sent to ask. "My friend Shawn thinks you're kinda cute," she said.

Not Shawna. Not Shana. Shawn. The 6-foot-3, 290-pound Goliath, the guy who benches 475 pounds, squats 695 pounds, steamed. "Yeah?" the former pro wrestler said, his voice growing louder, his eyes getting bigger. "Well you tell that ..." To print what Brock Lesnar said might make even John Rocker blush. But after his curse-laden outburst, he turned to a nearby reporter and explained, "I don't like gays. Write that down in your little notebook. I don't like gays."

Yes, he said this in spite of this event that took place not long before: