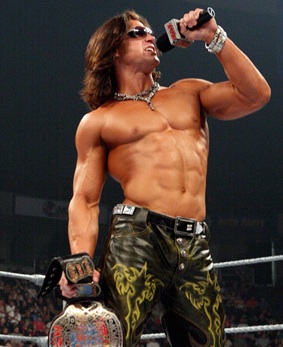 He's won a season of Tough Enough, he's won tag team, Intercontinental and ECW titles, and he's won a spot in your private fantasies thanks to his impeccable combination of jawline and abdominal definition. If you claim you've never pictured anything other than a title belt hanging out of the front of his trousers, you're a god damn liar.

Pros: That body won't quit. You can ask it nicely to please respect your apartment and your worldly possessions, and it will. Not. Quit. If Shaq had been hosting Smackdown, it would have been John Morrison's ass he was Twittering about. I think pretty highly of myself, but darlin' I'd let this man treat me like his personal finger puppet.

Cons: Sadly, the body won't quit. To build the textbook swimmer's body takes obvious dedication and focus. You want to say you admire the focus but...when you're hard at work and you catch that glazed look in his eyes and you just know he's reworking his macronutrient ratios it just hurts. Focus on me, honey.