Share All sharing options for: Madusa Miceli: The Best? 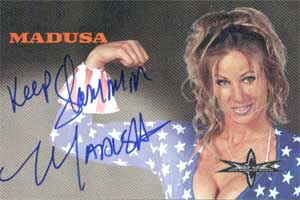 At the Bleacher Report, AkD is making the case for Madusa Miceli as the greatest women's wrestling champion of all time. Not Manami Toyota, Aja Kong, The Jumping Bomb Angels, or even Trish Stratus. Madusa.

The case after the break

So many great women have graced the world of professional wrestling. These women were journeymen in the ring as well as warriors. They were as tough as nails and tough as the men themselves.

They let their dominance be heard with vicious shrieks that instantly caused intimidation and the presence never went unnoticed with their stunning radiance. Some of these women were women, some were stars, few were superstars, and only one was the best.

Some of these women, indeed, were women. Some were Santino Morello in drag or Adrian Adonis. But in what sense was Madusa the best? Was it her series of 5 minute TV matches? Her bizarre plastic surgery? The time she put a title in a trash can and then was forgotten for years?

Her contributions speak for themselves as she didn't have to hold the NWA or any women's title for many years to be a well respected and prominent wrestler.

Whether it was the ring, the gym, or the dirt Miceli was a women's champion. Her successful tenure in the world of professional wrestling over the years put together a unique and unmatchable career as one of the greatest, most talented, radiant women wrestlers and personalities today.

Indeed. How can you argue with that?