Share All sharing options for: History of Wrestling: The Yokozuna Bodyslam Challenge 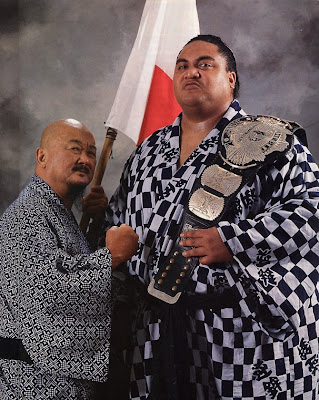 When Yokozuna (Rodney Anoa'i) made his WWF debut in 1992, the head office saw a new main-eventer.

Yokozuna would go on to beat Bret Hart for the WWF World Heavyweight Title, lose and regain the belt from Hulk Hogan all in under a year from his first match in the WWF. To celebrate his win, his manager, Mr. Fuji, would go on to issue an open challenge to any athlete, whether wrestler or not, to try to bodyslam Yokozuna on July 4th, 1993. That event, held on the USS Intrepid, was called the Yokozuna Bodyslam Challenge. Just some of the names that tried, and failed, to perform the move on Yokozuna were the Steiner Brothers (Rick and Scott), Bob Backlund, Randy Savage, Scott Burrell of the Charlotte Hornets, and Bill Fralic of the Detroit Lions. All hope seemed lost until a former narcissist walked down the aisle, wearing an American flag shirt, to proclaim a new Real American for the WWE fans to cheer for.

Lex Luger would go on to be one of the biggest busts in WWF history. Hoping for a Hoganesque response, at every live event Lex was met by a crowd going mild. The video, however, is worth it if for nothing else than to hear one of the worst rendition of "The Star Spangled Banner" you'll ever hear.