Share All sharing options for: Don't Believe The UFC Spin: The Real Details on Fedor's Offer 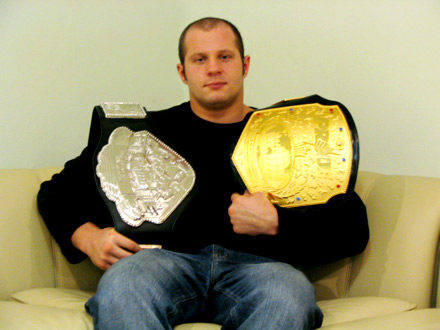 The MMA media is abuzz with the latest in the Fedor Emelianenko-UFC negotiations. Carmichael Dave, one of the UFC's favorite go-to guys in the media, announced the terms Zuffa is offering Fedor:

The UFC offered Fedor a 6 fight, 30 million dollar contract. That's 5 mil a fight
- The UFC offered Fedor an immediate title shot
- Lesnar/Fedor would be the biggest PPV in MMA history (we assume), and the UFC offered M-1 Global a cut of the PPV on top of Fedor's purse.
- Fedor was free to wear as many M-1 logoed items as he wished.
- The UFC also relented on allowing Fedor to compete in combat sambo.
Apparently, for good or bad, M-1 refuses to sign a deal unless the UFC agrees to co-promote

That's the story. The question: why is everyone buying it? Our new special contributor Jonathan Snowden, the author of Total MMA: Inside Ultimate Fighting has the real scoop on the UFC's offer.

"The numbers being floated there are a little misleading. The UFC's offer of $30 million over six fights isn't a guarantee," Snowden learned from a source. "The number is based on Zuffa's projections of what Fedor's take of the PPV money would be, and the numbers they are projecting are based on selling a ton of PPV's. The actual guarantee for Fedor is much more modest. It's true that if business stays at record levels Fedor could walk away with $30 million. But that is no guarantee."

In reality, this is a deal no more generous than many others Zuffa has offered to most of their top fighters. It's a deal that is risky for a fighter like Fedor who prefers getting his money up front, rather than take a risk on whether the UFC's business will continue to grow.

As long as Fedor can get guaranteed money elsewhere, he isn't likely to take a chance on a deal that only pays him huge money if the business model continues to grow at an astounding rate. He seems willing to wait for the next promotion to come along and throw money at him: guaranteed money.