History of Wrestling: "What you gonna do when Ric Flair runs wild on you?!?"

Share All sharing options for: History of Wrestling: "What you gonna do when Ric Flair runs wild on you?!?" 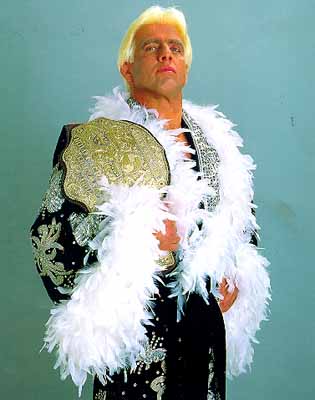 It was the feud that every wrestling fan had been waiting for. It was the closest that fans at that time thought they would ever get to a WWF vs WCW battle. Hulk Hogan vs Ric Flair. Much like the Invasion angle 10 years later, it could only disappoint.

Ric Flair had been wrestling for WCW (and the NWA) since 1974, winning every title, feuding with nearly every babyface, and elevating every opponent's game along the way. In 1991, he became tangled up in backstage politics with a new WCW president, Jim Herd. Reaching a point of no return, Jim Herd fired Flair while Flair was still WCW World Champion.

Flair would take that championship belt with him to the WWF, using the belt as a prop in vignettes, and declaring himself the "true World's Champ." This seemed to be pointing toward the match every fan had been waiting years for...Hogan vs Flair. Alas, it was not to be.

Hogan did wrestle Flair in a few house shows, but their matches were not televised, nor were they properly advertised. In fact, if it weren't for the Apter mags (Pro Wrestling Illustrated, etc.), many wouldn't even know the matches had taken place. There have always been questions of what exactly happened to keep this feud from happening. Many have felt that the WWF at that time believed Ric Flair wouldn't be viewed as a credible opponent for Hogan, being smaller and a more technical wrestler as compared to Hogan's "big man" offence.

The closest the WWF ever came to hinting at future matches between the two was during the brief Hogan-Undertaker program in late 91. During that time period is when this interview took place, which by the end of the clip involved several of the WWF's biggest stars at that time. Enjoy.