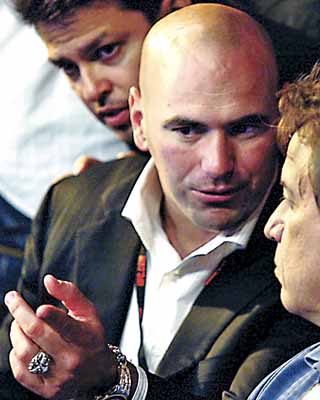 "See this shit? I told ya the t-shirt guy would fail."

So, Josh Barnett flunked a drug test and as a result Tom Atencio can go back to making shitty clothing and Dana White's grip on the North American MMA landscape has been tightened even further. And that's fine with me, he seems to be really good at his job. Plus it's going to be fun to watch people who burned their bridges with Dana because of the grand hopes they had of helping Affliction grow into a viable competitor come crawling back asking for jobs. Of course, this is only going to feed Dana's ego, but again, I'm fine with that. It takes a rare breed to be able to deal with the egos of dozens of dudes who punch people for a living, and Dana seems to have it down to a science. I certainly couldn't do it. He's setup a press conference next Friday to make a number of announcements, and I am riveted. Has he acquired some of Affliction's talent? Is Tito coming back? Is Dana planning a telethon to help save Tim Sylvia? Will it be another one of his bullshit smokescreens he likes to throw out there every once in a while? WHO KNOWS? All I know is when the dust settles the company who could possibly stand to lose the most from this is Strikeforce because now they will be firmly in Dana's cross hairs. Even if the UFC ends up being able to cherry pick the contracts they want there will no doubt be more than a handful of good fighters who will hit the free agent market. Strikeforce seems to be more than content with being second banana right now, and that can help them in the long run.

Why hasn't Dana gone into a full court press against Strikeforce? I'm almost certain it has nothing to do with his friendship with Scott Coker. If ever there were a promoter who would slit your throat and drop the "it's only business" line, it'd be Dana. I have to believe the reason that Dana hasn't full out declared war on them yet is because he doesn't see them as a real threat. Let's take a look at the facts

1- Strikeforce has yet to dip into the PPV market. In times like this where money is tight people can only afford to spend so much on entertainment. UFC is the among the top PPV draws in the US, and anything encroaching on that would be seen as threat.

2- Strikeforce is currently relegated to pay cable. Fewer eyeballs= fewer shots at cracking into the main stream. If/when Strikeforce gets a slot on CBS I'm sure Dana's mind will change.

3- Despite having a strong roster Strikeforce lacks a true, bonafide household name. Cung Le seemingly has no interest in fighting. Nick Diaz is slowly but surely making his way up most top pound for pound lists but he's not there yet. Frank Shamrock is in the twilight of a brilliant career. Brett Rogers is not a known quantity yet. In fact, Gina Carano is most likely Strikeforce's most visable fighter, and even she isn't all that battle proven yet.

The mixed martial arts world is in a state of flux. By this time next week we might have a better idea of what direction it is heading in.