Mexican Police Search for "the Fat One"

Share All sharing options for: Mexican Police Search for "the Fat One" 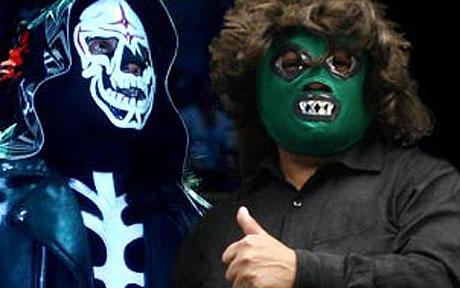 Earlier this month Mexican midget wrestlers, Espectrito II and La Parkita, were murdered by an old lady and a fat broad looking to rob them.

I'll let that sink in.

Apparently the women had been making a routine of robbing men in hotel rooms, using eye drops to spike their drinks, putting them to sleep. Turns out a midget, even a midget wrestler, doesn't have the eye drop tolerance of HHH or the Big Show.

The prosecutors say female gangs have been drugging men to rob them. The suspect and her accomplice, they allege, failed to take into account the wrestlers' small stature, and gave them too big a dose...A 65 year old woman is in custody. The police said they were searching for her alleged accomplice, known as "The Fat One".

If in Mexico, be aware of fat broads with promises of free drinks. It could end poorly. That is a sentence that holds up even when the fat broad isn't on a killing spree. Be safe El Dandy. Be safe.