Share All sharing options for: High Drama in Nagoya Honbasho 2009 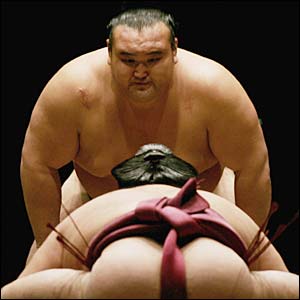 Sumo wrestling doesn't get much coverage in America anymore, a long drop from when NBC sports used to show one or two Grand Sumo final days a year on slow sports weekends. But it's still out there, as it has been for centuries. And with only six yearly Grand Sumo tournaments (3 in Tokyo, one in Fukuoka, one in Osaka, and one in Nagoya, every July, as is going on right now), there's plenty of time for sumo fetishists to over-analyze every piece of minutiae. But the face of the sport's really changed in recent years, with the only two active yokozuna (sumo's highest rank - sumo is a twisted Illuminati-style sport with different ranks that a panel of elders appoints you to) both being non-Japanese - Asashoryu and Hakuho, both Mongolians. To understand the shock of this to Sumo fetishists (who are highly intelligent and wildly delusional, similar to American baseball aficionados), it was the most terrible thing ever in the history of Sumo when a Hawaiian named Akebono got promoted to yokozuna in 1993, being the first non-Jap to get the title.

But Polynesians and Mongolians, though not true Japanese, are not too different a cloth cut from our multi-ethnic fabric, and have kind of been accepted. The past few years has seen a new invasion to Sumo, from east Europe, led by a bulky Bulgarian dude called Kotooshu, who raced to the second highest rank in Sumo (ozeki) as fast as anyone else in history, and faster than any native Japanese dude ever did. His challenge to the top tier is all the more impressive due to the Mongolian pair of yokozunas dominance, Asashoryu and Hakuho having won 33 of 40 Grand Sumo tourneys since Dec. 2002. And he doesn't seem to be slowing down, leading a new wave of crazy Euros helping revive sumo in the world's eyeballs.

A Grand Sumo goes for 15 days, one match a day for everybody, and it's currently in the home stretch with 4 days left. Coming into this tourney, Asashoryu was getting called out in the media for playing golf and kicking it at a Mongolian sauna, which doesn't jibe with traditional sumo's alpha-male culture. And he has not done well, having already dropped 3 matches, and out of contention for a record-setting 24th Emperor's Cup (given to winner of the Grand Sumo tourneys). The title of yokozuna is only given out to men who are supposed to contend in every Grand Sumo, so him sitting at a seemingly great 8-3 is not taken lightly. But he is the sport's current Michael Jordan, perhaps in his waning years, and he could play a spoiler for the last four days.

Hakuho, however, has lived up to his billing, and sits tied atop the leaderboard at 10-1. Also at 10-1 is Kotomitsuki, the only true Jap still in contention and the oldest dude of modern times to be promoted to ozeki. Old Kotomitsuki has to go up against Asasyorhu next, so that tie could easily be broken. Kotomitsuki did just hand Hakuho his first loss yesterday though, and perhaps the old Jap guy will ethnically cleanse sumo, at least for this tourney.

And then there's Kotooshu, sitting not only at 10-1, but his first loss yesterday coming to a dude called Chiyotaikai was after his opponent pretty obviously looked to have jumped before Kotooshu had set himself. Generally, this is a foul and the wrestlers are called back to restart their match, but the official let this one slide and Kotooshu could not regain control from the momentum advantage his competition was allowed. And with sumo ties to organized crime, not to mention a pretty hefty weed-smoking scandal surrounding the sport in recent months (all active sumos have been drug tested four times apiece the past 90 days because of it), it's not too hard to imagine slight tweaks and twists being used to create a favorable outcome, for tradition, or for profit, or for whatever reason.

Still, the addition of bulky crazy dudes from notoriously Eurotrashy countries can only be a good thing. The next logical step would be for the American economy to continue to tank and top tier college football offensive and defensive linemen to realize they could make more money in Japan doing sumo.