The State of RAW for July

Share All sharing options for: The State of RAW for July 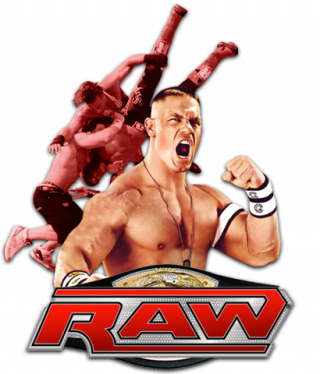 We here at Ring Psychology understand that it may have been some time since you've followed wrestling regularly. Perhaps you're looking to jump back into it, but you're concerned you won't understand what's going on. "Oh no," you may be thinking,

"I don't want to look like a fool in front of my wrestling friends if I can't tell The Miz from The Morrison!" Don't worry, we're here to help! "The State of..." will provide key storyline info and identify the main players of all the major television shows...and ROH, too!

Monday Night Raw, or simply "Raw", is WWE's flagship show. In its 15+ years on the air, it has a storied history of presenting the most in-your-face, envelope-pushing sports entertainment in history. Austin pulling a gun on McMahon? Pillman pulling a gun on Austin? Hot lesbian action? It all happened on Raw. Now forget all the cool stuff I just said, because over the past two years, WWE has been moving in a decidedly family-friendly direction, and the most scandalous thing we're treated to these days is occasionally there is some sort of vague dick joke.

Raw is, at this point, far and away the most boring and bland wrestling product on television, because Vince McMahon rules over it 100%. It's the only show he gives a shit about, so it's the one that goes through a billion rewrites before making it to air. You may get an awesome interview on Smackdown, or see a 20-minute awesome match on ECW, but watching Raw is like watching wrestling on a treadmill. The same four dudes are going to be all over it, you'll see some attempts at comedy which Michael Cole will be told to laugh too hard at, and you'll delete it off your DVR without watching all of it.

THAT BEING SAID, let's take a look at the major players and storylines of Raw!

The current running theme of Raw is that each week there is a new "guest host" who acts as General Manager and what the guest host says, goes! The first few guest hosts have been Batista, who is currently out with a biceps injury, "The Million Dollar Man" Ted DiBiase, and Seth Green. Next week's guest host is the gestalt entity known as ZZ Top. Keep your eyes peeled for Charo as we continue to move BACKWARDS THROUGH TIME.

WWE Championship: Currently the WWE title is held by Randy Orton. He's the guy with the ferret-like face, full sleeves and enormous, enormous thighs. He's also the leader of a group called Legacy, which consists of Ted Dibiase's son and Dusty Rhodes's son. He kicked the entire McMahon family in the head and sent them to the hospital one by one, drawing the wrath of Triple H, who has been outed as Vince McMahon's shoot son-in-law. Randy Orton kicked Triple H's wife in the head, DDT'd her in the middle of the ring, then placed upon her unconscious lips a lecherous smooch while Triple H was handcuffed and forced to watch. Then Triple H invaded Randy Orton's home with a sledgehammer and hit all of Legacy with sledgehammers and still no one gives a shit about the feud because these two dudes had the most boring match of all time at Wrestlemania and WWE doesn't let wrestlers bleed any more and why the hell wouldn't these reprehensible actions warrant Triple H ripping off Orton's head and drinking the blood out of the neck hole. At any rate, this BLOOD FEUD has been distilled down to Triple H making dick jokes about Randy Orton and acting mildly irritated by him. Triple H and Randy Orton have wrestled each other on PPV in something like 8 of the last 14 events and it doesn't show any signs of slowing down any time soon, so buckle up.

As a matter of fact, the upcoming WWE PPV, Night of Champions, features a three-way match for the WWE Championship between Randy Orton, Triple H, and John Cena, whom you all know from #1 selling DVD in the country, 12 Rounds. John Cena has recently been involved in a feud with ex-Real World star The Miz, who is defying all logic by being shockingly awesome in the mic, watchable in the ring, and honestly just about the only good thing about Raw over the past three months. Also of note about John Cena is that his finisher is no longer called the "F-U" because of the new family friendly direction. It's not called the Attitude Adjuster, because that's the worst name they could think of.

United States Champion: The current United States champion is Kofi Kingston, an energetic chap from Jamaica (he is actually from Ghana). His catchphrases include "Boom, boom, boom" (with pyro) and his offense is "wacky". There's nothing much to say about Kofi. He's fun to watch and has probably the best theme song in the WWE, but is often paired up with opponents he can't do much with. Case in point: recently Raw "acquired" Evan Bourne from ECW. Bourne is an amazing high-flyer, one of the best wrestlers in the company, and has the most exciting finisher of anyone in WWE, the Shooting Star Press. A feud between Kofi and Bourne is what basically everyone would like to see. So naturally, WWE inserted The Big Show into the feud, because Vince likes the giant fat guy to take everyone down a peg or two. These three will be having a match at Night of Champions.

Divas Champion: The current "Divas Champion" is Maryse, a sassy French lady with a ton of charisma who is actually pretty entertaining. They have been doing a very slow buildup toward getting her together with The Miz, which would just be great. Maryse is feuding with Mickie James, who came into the company as a batshit insane lesbian stalker but now her character is that she's "spunky" or something. Raw has the most female wrestlers of any of its brands but they only ever focus on two at a time, so you can consider Gail Kim, Alicia Fox, Kelly Kelly, Beth Phoenix, Rosa Mendez, et al sort of interchangeable. (Alicia Fox is the black one.)

Unified Tag Team Champions: The Tag Team Chamionships got unified at Wrestlemania, and are currently held by Chris Jericho and Edge. The only problem is that Edge snapped his Achilles tendon two weeks ago and is out for the rest of the year. The Tag Champs can appear on all three brands/shows, and they have not yet announced who will be taking Edge's place or whether Jericho will be stripped of the titles. On the most recent Raw, it appeared that Jericho will be possibly moving into a singles feud with "The World's Strongest Man" Mark Henry, who is in the midst of a big push as a good guy, and is pretty great for the most part.

Raw only has two tag teams, The Colons and Legacy, which is to say that Raw only has one tag team, because Primo and Carlito Colon are now splitting up. It is terrible when brothers fight, except when it is for our entertainment. Primo is the one with the swarthy thin mustache and Carlito is the one with the afro. Carlito will be playing the role of "bad guy" in this feud.

Those are Raw's big storylines leading into Night of Champions.

Other notables: Filthy leprechaun Hornswoggle has been feuding with family disgrace Chavo Guerrero in increasingly humiliating situations for Chavo (wrestling on his knees, wrestling with one hand tied behind his back, etc.). Slightly more entertaining than THAT is a feud that was set up between MVP, who is ostensibly a parody of Terrell Owens or a similar prima donna athlete and a legit ex-con, and Jack Swagger, who is a champion collegiate wrestler with a lisp. Jack Swagger is great because his nickname is "The All-American American" and he plays the part of the put-upon bad guy who feels he is being treated unfairly. He talks about how great he is all the time and is a good wrestler, and he'll probably go far in this business. His theme song is a rip-off of Rage Against the Machine, so make of that what you will. MVP is awesome because he is great on the mic and in the ring and his moves include alternately kicking a dude in the face as hard as he can, and then throwing an imaginary basketball before elbowdropping someone. Sadly, this feud may already be over because this week Jack Swagger pinned MVP clean in their first match.

Now you're up to speed on Monday Night Raw! A couple interesting things, a bunch of "blah" stuff, but you're ready to dive right in! Will ZZ Top command the Divas to participate in a "Pearl Necklace" match? Tune in to find out!

See you tomorrow with The State of Smackdown!