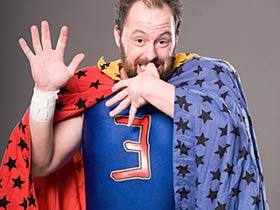 Everything old is new again. Especially people with developmental disabilities.

Although it's unlikely that Eugene will be appearing on WWE television any time soon, except perhaps to get fondled by Goldust or dance around a Maypole with Hornswoggle, WWE has re-signed the wrestler formerly known as Eugene, Nick Dinsmore. Dinsmore has been all over the independent circuit since being released in 2007, appearing as "U-Gene," the most clever way around a trademark since Rosey appeared in the indies as "Ro-Z".

According to the Observer:

--WWE has signed Nick Dinsmore. They want him to help groom young talent.

Hopefully this is literal and Dinsmore will be working as an official WWE hairstylist. Congrats, Eugene! Welcome home!