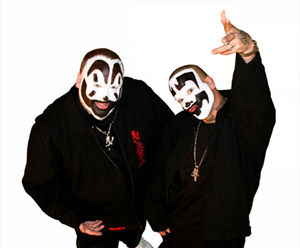 Maligned rap group Insane Clown Posse have long been noted avid wrestling fans, and have appeared in basically every wrestling promotion ever, including WWE, WCW, TNA, and ROH. As long as there have been dudes throwing money at quasi-celebrities to appear on their wrestling programs, ICP have been pelted with said monies. There are two important things to keep in mind here. The first is that your wrestling promotion will never benefit from having ICP in it, ever. Any "juggalos" who would care are already watching as much wrestling as they can anyway, and they don't have enough money to order a PPV or buy a DVD because they need to buy eight versions of a Ringmaster hockey jersey in size 5X. The other thing is that ICP are unabashed lifelong marks, but not very good wrestlers. In fact, you could say that they're actively bad.

A handful of years ago, however, ICP realized that they now somehow had enough money that they could start their own "wrestling promotion" as it were, and Juggalo Championship (originally "Championshit") Wrestling was born. In the early days of JCW, it was basically an excuse to have themselves beat up indie wrestlers dressed as Eminem and Kid Rock, or to have Abdullah the Butcher and King Kong Bundy stiff their best friends for a laugh, but in the past couple years ICP has slowly been throwing money at more hilariously random indie and ex-WWE wrestlers and making truly inspired wrestling cards for JCW's sporadic events.

And now, if Wikipedia is to be believed, they have outdone themselves, and at the next "Gathering of the Juggalos" festival in scenic Cave-In-Rock, Illinois, several thousand face-painted fans will be presented with a card that features:

That lineup makes me positively giddy. I think I speak for every true wrestling fan when I say thank you, Insane Clown Posse.