You got your pro wrestling in my MMA

Share All sharing options for: You got your pro wrestling in my MMA 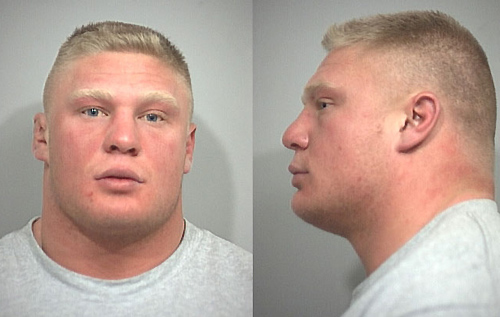 I am a man of simple needs. I like my steaks medium rare. My laundry detergent of choice is Tide. The only chore I ask of my wife is to handle the check book. I am not that hard to please. This, in essence, is why I am so god damned infuriated with Brock Lesnar. Professional wrestling in this day and age is little more than the old guy at the club. Awkward, out of place and completely oblivious to reality. I, like most intelligent 30 somethings, have left pro wrestling in my rear view mirror. I have reached a point in my life where having once been a wrestling fan is as much of an embarrassment as having once been a fan of Limp Bizkit. I have taken my wrestling dvds and attire and placed them in a box in the closet that also contains my red Yankees hat, hatchet gear and other items of eternal shame. Pro wrestling is a chapter of my past that I had assumed was long since closed. On Saturday night Brock Lesnar took my new reality, shredded it into a billion tiny pieces that he then fashioned into a crude-yet-functional pocket vagina that he proceeded to rape before my very eyes. For this, I will never forgive him.

When I heard Brock was entering MMA I was excited because the man is a born entertainer and a freakish athlete. The fact that a good chunk of his prime was spent getting cut by the Vikings and wrestling in Japan where no one gives a shit didn't sit well with me. Thus, his foray into the fight game intrigued me to no end. I watched with fiendish glee as he pounded the ever loving piss out of Olympic silver medalist judoka Min Soo Kim in his debut. I was simultaneously let down and encouraged after his submission loss to Frank Mir in their first fight. I was impressed with his utter dismantling of Heath Herring and Randy Couture. I was even screaming at the top of my lungs as he rolled Mir into a greasy, bloody ball and then knocked him into next week in the rematch. I have always been a Brock supporter.

And then, it all fell apart.

As Brock began slobbering and mocking a dude he just beat the hell out of I felt something in my gut start to bubble. It wasn't gas. It wasn't something I ate. It was something entirely different. Something... sinister. The past was attempting to resurface. MY past was attempting to resurface. This gurgling feeling continued to grow as Brock flipped off the booing crowd and then proceeded to rant and generally make an ass out himself. MMA was supposed to be my safe haven. My place of refuge. Brock had taken something that I had left for dead and revived it. Only it wasn't the same as it was before. It was different. Perverse. As Jud Crandell in Pet Sematary said: "Sometimes dead is better".

Brock's antics have shown me that I cannot outrun my past as a wrestling fan so I may as well embrace. Shit.