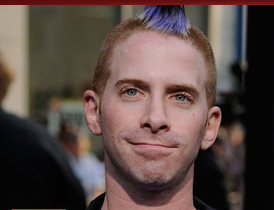 Diminutive ginger Seth Green inserted himself into the main event of tonight's Raw which was, otherwise, a remarkably uninteresting program.

Beginning with an opening segment in which we learned Seth Green was small, (this was established a number of times throughout the program) Green booked a main event of himself, Triple H, and John Cena vs Randy Orton and his hated contingent of goons, Legacy.

Seth Green actually saw some action in the main event, punching Cody Rhodes right in the maw and then also breaking up a pin on Triple H. However, typical WWE antics ended the match in a no contest which was bad for the business and I expect to read all about the poor sportsmanship on numerous blogs tomorrow.

In other, non Seth Green related news, Chris Jericho announced that he would be picking a new tag team partner. He was then beat up by Mark Henry who is working a jovial bully gimmick. Also, a number of women wrestled while wearing bikinis. I don't know what the hell.

For complete results, why not check out this little site?