GSP: The Greatest Ever?

Share All sharing options for: GSP: The Greatest Ever? 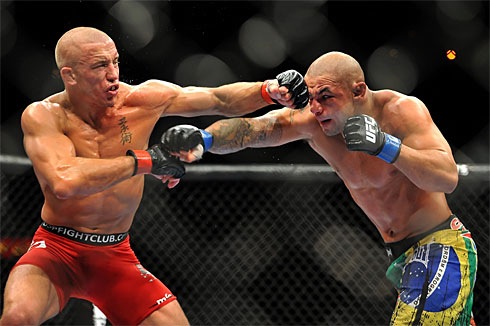 All the post fight talk centered on Brock Lesnar's antics. But very quietly, GSP continues to make a case for himself as the best fighter of all time. GSP has wins over Mayhem, Trigg, Sherk, Hughes, Penn, Kos, Fitch, Parisyan, Hieron, Serra, and now Alves. St. Pierre didn't get to the top against old men and also-rans like Lesnar did. He beat the very best fighter ever in his weight class (Hughes) and every fighter that dared challenge him.

For all the talk of Brock Lesnar being "unstoppable" coming out of UFC 100, it is GSP who looked the most dominant. Every time we see him in the cage, he's like a different fighter. Against Alves he displayed lightnng fast combinations, a good jab, and the most explosive takedowns we've ever seen. It would be a shame to see the small-framed St. Pierre forced into an ill-advised fight with Anderson Silva. The UFC would be better off letting him sustain his excellence at 170, allowing the sport to have at least one star fans can be proud of.