Share All sharing options for: Smackdown 7/10/09: Ziggler to the fore 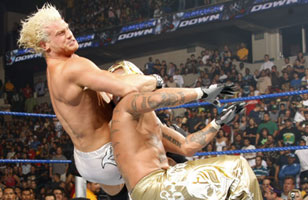 Rey Mysterio's next opponent? Looks to be Dolph Ziggler

Jericho counters ANOTHER hurricanrana with the Walls of Jericho again! Mysterio struggles and crawls over to the ropes and gets the break. Rey leaps over Jericho and he lands outside, then hits the Asai moonsault! Jericho is back in the ring and he catches Mysterio flying into the ring with a CODEBREAKER! He slowly crawls over to cover, and Rey kicks out at 2.9! Jericho yells at him to "Stay down!" and kicks him in the ribs. Mysterio catches Jericho being overzealous dropkicking him and he falls on the ropes. The 619 connects and so does the springboard splash; 1-2-3!! WINNER and STILL Intercontinental Champion: Rey Mysterio.

As soon as the match ends Edge runs in the ring and goes after Rey, but Rey rolls under him tripping him in the process. Mysterio rolls out the ring and Dolph Ziggler of all people comes down to attack Rey. He shoots Mysterio in the ring to suffer a SPEAR! Edge picks up Rey in the wheelbarrel position and Jericho hits the Codebreaker again! Edge and Jericho invite Ziggler in the ring to get some more of Mysterio. He gets in and stalks Rey slowly getting up, and strikes with his finisher. It appears now Rey Mysterio has a challenger for the IC title for the next PPV (which I predicted). That's how SmackDown goes off the air.