Brock Lesnar: Kind of a Jerk

Share All sharing options for: Brock Lesnar: Kind of a Jerk 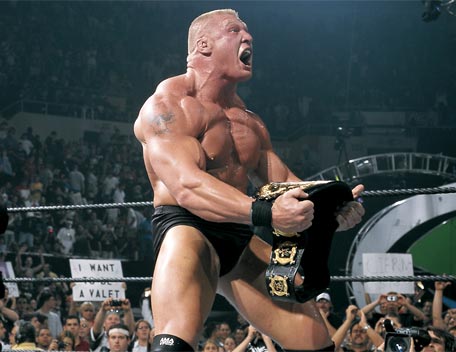 When I interviewed Brock Lesnar, he was kind of an ass. About half the answers were: "Next Question." It appears I'm not the only one that has problems getting a response from Lesnar. Next time I'm asking him about the penis tattoo, consequences be damned.

Here is a partial transcript of his scintillating performance on TSN's "Off the Record."

Landsberg: All kinds of reports that you and Tito Ortiz got into a brawl this week. What’s the story there?

Lesnar: That’s the first I’ve heard about it.

Landsberg: So there was no confrontation between you and Tito?

Landsberg: Do MMA fighters refrain from having sex the night before a fight?

Lesnar: I hope not.

Landsberg: Georges St. Pierre doesn’t think you can fit into his tight bicycle shorts. What do you think?

Landsberg: How do you think Kimbo Slice will do in Ultimate Fighter?

Landsberg: How much can you bench press?

Lesnar: Whatever I want.

Landsberg: Wrestling fans are dying to know how your wife Reno Mero is doing?

Lesnar: None of your business.

Landsberg: When was the last time you called her ‘Sable’?

Landsberg: When was the last time you spoke to Vince McMahon?

Landsberg: When you did that (shooting star press) on Kurt angle at WrestleMania, what was the first thing going through your mind when you landed on your head?

Landsberg: Do you plan on getting anymore tattoos?

Lesnar: Not at this time.

Landsberg: Give me one word to describe Dana White.

Landsberg: Give me one word to describe Vince McMahon.

Landsberg: There’s a lot of negative comments on your skills on the ground. What do you say to those critics?